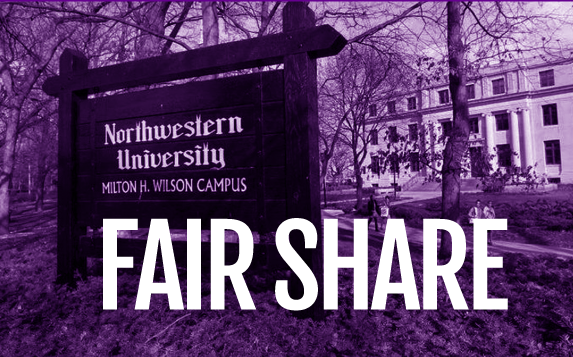 I have deep roots and respect for Northwestern University. My great great grandfather, Elhanan Searle, was in NU’s first graduating class of five in 1858. He wrote the commencement speech on the Philosophy of Civil Liberties and went on to work with Abraham Lincoln in his law office in Springfield. My youngest son, Gus, graduated from NU last year, I completed part of my graduate studies at NU and my father taught photojournalism at NU’s Medill School of Journalism.

In 2000, residents of Evanston, led by Firefighter Dave Ellis (Co-Chair of the Fair Share Action Committee), did the difficult and time-consuming work of getting a “fair share” referendum placed on the ballot. It allowed Evanston residents to vote and express themselves collectively as to whether or not they felt NU should pay its fair share in lieu of property taxes to the City of Evanston. This concept, which is frequently referred to as PILOT (Payment In Lieu Of Taxes), has been widely adopted by many ivy league and other universities across the U.S. 84% of the Evanston voters voted YES to NU paying its fair share to Evanston. Northwestern’s annual contribution to Evanston of $1MM is grossly inadequate. NU has an endowment of over 11 billion dollars. If NU paid its fair share it would contribute well over $20MM to the city annually, perhaps closer to $30MM according to former CoE CFO Marty Lyons. Such an amount could cover the total cost to taxpayers of the annual Fire and Police Pension payments i.e catch up payments plus annual regular payments. However, citizens’ overwhelming will for reform means nothing without Aldermen that are willing to negotiate hard for it. I will bring the needed resolve and tenacity to this negotiation.

And from the list of the top 10 richest universities these universities also contribute far more to their host cities:

Even as recently as this year, NU refused to pay even for itemized services that it received in 2019 from the Evanston Fire Department to the sum of $659,000.

Evanston’s City Council members have to negotiate with resolve in regard to NU’s fair share compensation to the City on behalf of Evanston residents in order to secure a more substantial and appropriate payment. I firmly believe that we can work together to negotiate a fair payment in lieu of taxes from Northwestern University to Evanston that will provide financial relief for the City of Evanston. In 2004 I successfully rallied the Evanston community to challenge Northwestern University to close its toxic medical waste incinerator; and we won. With much strategic organizing and research and evidence we convinced 8 out of 9 City Council members to join our cause and vote in favor of an ordinance banning medical waste incineration in Evanston. Our joint movement led to Illinois and U.S. legislation to restrict and reduce toxic medical waste emissions across the state and the nation. As a council member, I will work effectively with my fellow council members and Northwestern representatives to negotiate a fair and more appropriate contribution from NU on behalf of the residents of Evanston.