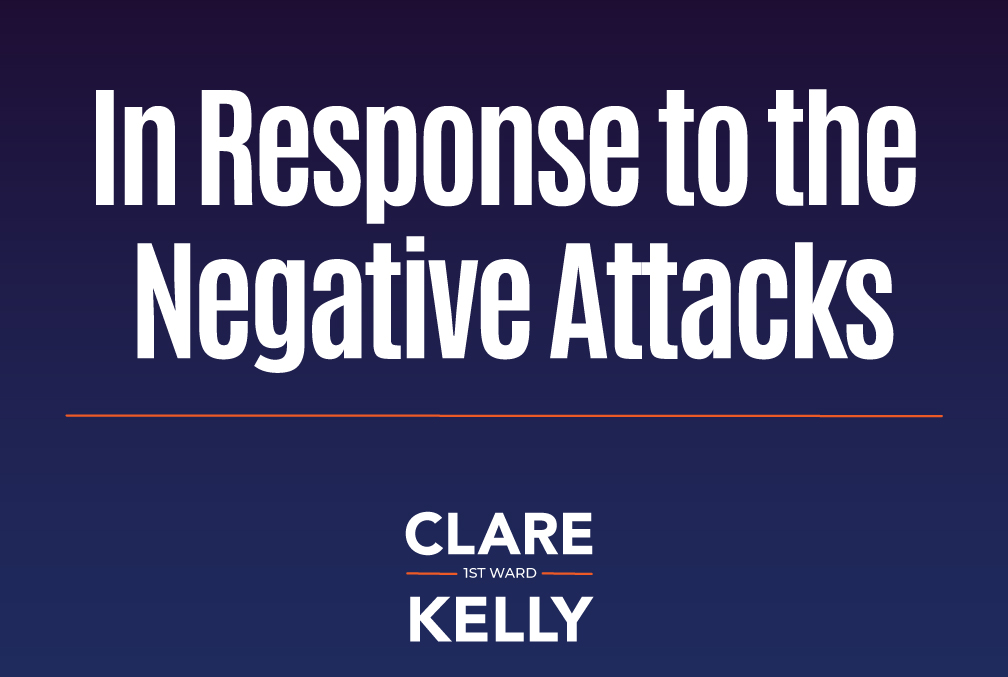 In response to the negative attacks by Judy Fiske and her allies at Evanston Together LLC:

Changing our current form of government from a weak to strong mayor has never been any part of my platform, agenda, priorities or goals. While I think it’s foolish and irresponsible to rule out any course of action that might be available to best serve the interests of Evanston, this isn’t something the city council would decide, nor is it something that I think should be considered until we have exhausted the many less drastic measures available to us.

I care deeply and passionately and always have and always will about Evanston and Evanstonians. I have challenged unfair practices and questionable and profligate spending of our tax dollars. As an Alderman, I will be a strong steward of our budget, with a detail oriented focus on spending to ensure that our tax dollars are used in a responsible and transparent way. Those, such as my opponent, who have been at the helm of the undisciplined budgetary expenditures have resorted to cheap and dishonest attacks with sexist tropes deriding a woman (me) who has challenged their tax and spend agenda.

I have received endorsements from Rep. Gabel, Cam Davis, the DPOE, the Sierra Club, to name a few. These respected officials and organizations would not provide the endorsements if they did not fully understand that I am a consensus builder who gets things done. Lisa Madigan and Jeff Schoenberg presented me with the DPOE Committeeman Leadership Award. I’ve received numerous other awards acknowledging my leadership and community service.

Regarding my driving record
For anybody who has not been following the opposition’s obsession with a routine traffic ticket that I received two years ago, below is my response to the recent Evanston Now article about this.

It was a routine traffic stop, in the middle of the day, two years ago on my way back from the beach with my dog. I made a bad left turn from Grove onto Ridge Avenue. And to boot, I had left my purse at home and I had inadvertently failed to pay a previous ticket which led (unbeknownst to me at the time), to the suspension of my drivers license. It was a triple whammy.  The police officer wrote me up for several traffic infractions and I drove home. I resolved the tickets immediately the next day at the Skokie Courthouse and the suspension was rescinded.  I didn’t realize that the stop, technically, constituted an “arrest.”  I wasn’t fingerprinted, handcuffed, or taken to the station. When Evanston Now published the traffic stop as an “arrest” I went immediately to the Evanston Police Department to inquire whether or not I had, in fact, been arrested at that traffic stop. Two officers looked up my record and assured me that I had never been arrested.  I followed up once I decided to run for alderman because the Evanston Now piece about my traffic stop and “arrest” still appeared towards the top of searches for Clare Kelly. An attorney ordered background searches that revealed I had no “arrest  record.”  I made further inquiries with EPD. A Commander confirmed that I had no arrest record and that Chief Cook was the only person who could correct an error on the police blotter. At the recommendation of an attorney I wrote to Chief Cook to ask that, what seemed to be an error by all accounts, be corrected.  At the request of Jeff Hirsh of Evanston Now, I ordered abstracts of my public driving records both internal and public which also did not show any indication of any arrest. I shared these with Mr. Hirsh. Even an attorney who specializes in traffic violation reviewed the records and said there were no arrests indicated on the records.  Clearly, even the police officers and one Commander did not have easy access to the documents that demonstrated that this traffic stop, technically, constituted an arrest. Thank you to Jeff Hirsh of Evanston Now, for obtaining paperwork because, as he told me, he “know(s) people,”  that I now know that that traffic stop was, in fact, technically, an arrest because of my failure to pay a prior ticket. I am posting here the records that I ordered for Jeff Hirsh that show no indication of any “arrest”  and background checks that also reveal 0 arrests. I never tried to “hide (my) arrest record.”  Regarding the suspended license comment, I now understand the legal difference between a revoked and a suspended license. My license was never revoked. The suspension was rescinded the next day when I immediately followed up in traffic court after being stopped for turning left from Grove onto Ridge.
I now know that the Grove/Ridge traffic stop was, technically, an “arrest,” thanks to Evanston Now reporter, Jeff Hirsh, for going to such lengths.  I feel it is important for Evanston residents to understand that a routine traffic stop may be an arrest and may never appear on any public record and yet someone like Evanston Now reporter, Jeff Hirsh, may decide to publish it. Also worth knowing, because such traffic violations are minor, these  “arrests” can be easily expunged and sealed (if you are aware they exist).

Home Rule
I support home rule. I have never stated that I don’t. I have, however, pointed that some cities, such as Rockford, have brought referenda to the ballot because of out-of-control property tax increases. It is important for us to be aware of how some cities moved to resolve their escalating tax burdens.

Affordable Housing
I have always been an adamant proponent of Affordable Housing. I have spoken often and consistently about this. Our city does not do enough for affordable housing. In fact, I have spoken to strengthening our Inclusionary Housing Ordinance which was weakened over this last term. I have even written a guest essay for the RoundTable about how our city is not requiring enough affordable units from planned developments.